It has been raining for a month solid, the fact that its raining shouldn’t stop you from getting out and doing what you love to do but it makes it hard when you get a month of fat sideways rain, everyone knows what I am talking about. the rain that soaks you wet to your bones every time you step out into it. Doesn’t matter if you are getting out of your car to got to work or into the shops, by time you walk in the office door, you are soaked to the bone and there is nothing you can do to avoid getting that wet.

Well, I am always keeping a keen eye out for new locations to shoot especially once the rain had stopped, so late this afternoon the rain had stopped and I decided to head to what I thought was going to be the best spot for me to shoot. If people drive past this and probably not think to much of it. There is what I would probably call a compound with the walls made from old and rusty 44 gallon drums. These walls stand about 8 to 9 feet high but that nots what I saw. I saw a load of different colours and textures that I wanted to photograph. So I made a plan to simply drive out and introduce myself and ask if they minded if I took some photos of their 44 gallon drum wall. I also wanted the background story behind the wall as well. I mean there aren’t to many people that build walls around their property out of this stuff.

But when I arrived at the gates to property I found them to be locked but I could hear voices. Should be no problem, I’ll just walk up to the gate and say excuse me but would you mind if I took some photos of your 44 gallon drum wall and hopefully they would have been nice enough to say sure, why not.

That’s not what I got at all. I got an elderly couple in the midst of a full blown domestic dispute. My original thoughts were, holy crap he’s man handling her pretty bad and they seem quite drunk. Do I say something or do I just stand here quietly?

I decided that I would stand there quietly and watch them walk off into their property, but I did realise that the old male was not actually drunk but walking his female companion away so she could sleep off her drunken stupor. I slowly backed away and got in my car and when I figured they were far enough away I started up and drive off and left her to sleep it off.

After all that excitement I decided that I couldn’t just go back home with out getting any photographs at all. It was pretty dark by now and I scoped out the usual lookouts but because of the humidity there was a haze that hung over the city which made it difficult to photograph the city lights. Deciding that I need to practice getting the ISO and White Balance correct in camera.

So in the end all was not lost and I have promised myself that I will go back to the property and photograph those 44 gallon drums and I got this photo of some neat light trails going sown Castle Hill road. 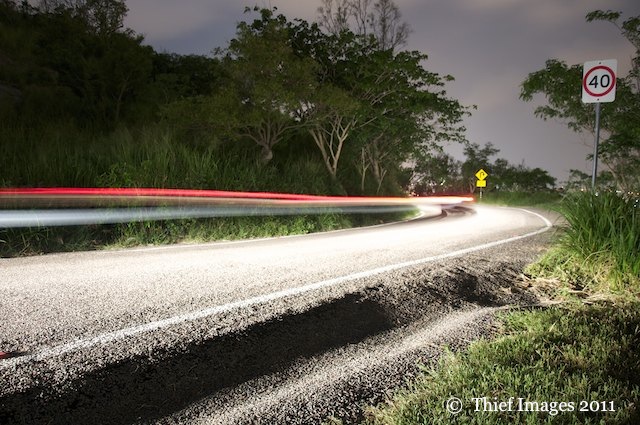 One thought on “44 Gallon Drums and a Domestic Dispute”